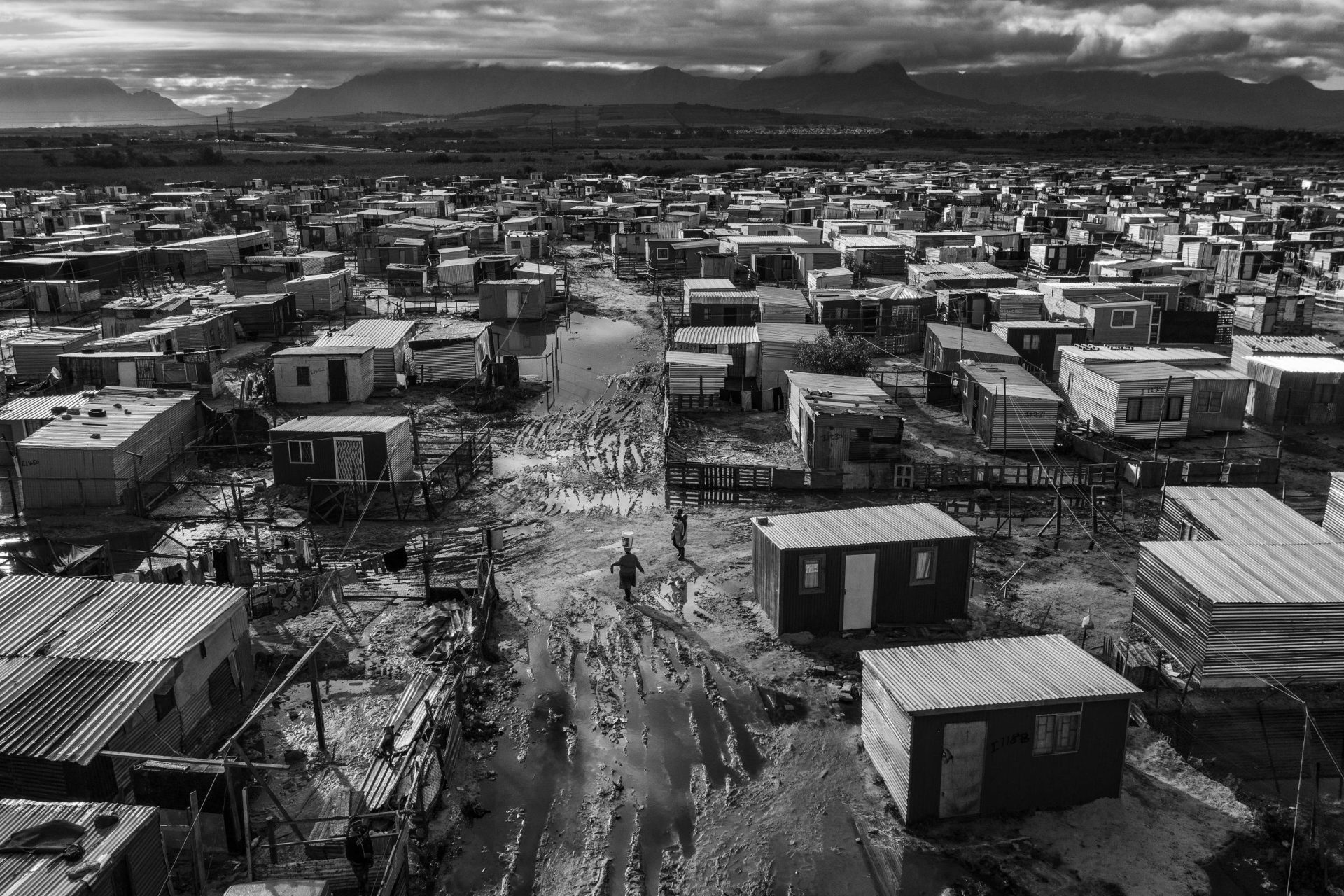 Chapter Eleven – Be Careful what You Wish For

Moenie Saterdag winkels toe gaan nie, die swartes trap vir jou vrek want daar is so veel van hulle (don’t go to the shops on a Saturday, the blacks will stamp you into the ground because there are so many of them).” If Pieter was a racist, his parents were one hundred times worse. Pieter’s father, Frik Erasmus, had been a car mechanic having left school in grade ten after his parents could no longer afford to pay his school fees.

As he grew older, Frik, moved from the grease-covered workshop in Church Street, Pretoria, to the spares department. This is where the hatred grew in him as he had to sell spare parts to people of all skin colours.

His command of the English language was close to non-existent and when he spoke his home language of Afrikaans to the blacks at the shop, few responded. They saw it as the language of the oppressor.

*His wife, Petro, did not interact with blacks at all. She believed in the conservative line of ‘hou misdaad af, skiet n swarte’ (reduce crime, shoot a black)’.

Petro was of the mindset that all blacks died of the HIV-Aids virus; hence she referred to them as ‘HIV-positief’ (HIV positive).

The stereo-type conservatives often referred to blacks as ‘HIV positives’. The belief was that blacks had umpteen children out of wedlock and due to being promiscuous; they often succumbed to the dreaded HIV-Aids virus.

It is the above thinking of racist parents that rubs of on the children and Pieter Erasmus grew up believing that people of skin colour were criminals and a danger as well as being inferior to whites.

As he sat down again at the kitchen table, Pieter could no longer hold off the tiredness. He drifted off into dreamland and found himself on a journey that few white men are privy too.

“Waar die bliksem dink jy loop jy (where the hell do you think you are walking)?” said a burly Afrikaner policeman to Pieter.

Pieter’s natural reaction was to attempt to right-hook the cop but something stopped him. It was as if he could not lift his right arm to apply the punch.

Before Pieter could answer, the cop had pushed him out of a whites-only row of people waiting for a bus and towards a township taxi queue. In most white circles, the taxi was known as a kaffir taxi (a taxi that only transported blacks).

As he climbed on to the nearest taxi, Pieter tried to make head or tail on what is happening.

“Dumelang, ntate (good day, father),” said a young boy to Pieter, who was seated in the front of a township taxi next to the driver.

“Chelete ea ka ke ena (here is my money),” said the youngster, as he tapped Pieter on the shoulder.

What does this kid want? I have my own money, thought Pieter, who never knew that it was the job of the person in the front seat to collect the cash for the driver, who was busy behind the steering wheel.

As he took the coins from the young boy, he caught sight of his own hands. Pieter, you are black!

Few people ever speak on a township taxi and they never sit with their back to each other as this is deemed disrespectful.

Forty minutes passed as the taxi made a trip from Pretoria central to Mamelodi East, where he disembarked.

Pieter Erasmus took a closer look at his hands. They definitely were black. As he walked past a hair salon situated on the pavement, he managed to see himself in a mirror. Pieter, your face is black too.

As he broke out into a sweat, he felt like he was on the brink of having a heart attack or a nervous breakdown. What was going on?

Two Tsotsis (thugs) had been watching him and quickly worked out that he was short of confidence. Before Pieter knew what was happening, the thugs had him up against a concrete wall. One pinned him to the wall, with a knife place across the victim’s throat, while another checked his pockets and eventually found his wallet.

Both men disappeared at the speed of light, but their escape was not as smooth as they expected. Another two men who saw the attack, set off in hot pursuit of the thugs.

Pieter was shocked. This was all new to him. He had never been mugged by black men before. Usually, his violent streak would have seen him react. However, here he was… a white man in a black skin in a black township. Even if the cops were around, they were most unlikely to help a black man from being attacked.

Within five minutes, Pieter’s luck had taken an amazing turn. A black youth wearing an Orlando Pirates Football Club cap jogged towards him. Was this going to be another mugging, thought Pieter.

No, the young man produced Pieter’s wallet and handed it to him. Out of habit, Pieter checked the contents of the wallet and saw that nothing had been removed.

The young man explained in English.

“The two guys who mugged you are visitors to our area and don’t understand the trouble that they could have caused so our local guys sorted them out,” said the youngster, wearing old denim jeans and a tattered white t-shirt.

“We don’t want any trouble in the area. We have our own gangs that run this part of Mamelodi. The last thing they want is you running to the cops. Our gangsters do their own policing here and are pretty good. People think twice before committing a crime here as they know that local mob violence is the price they will pay if they get caught.”

Pieter caught on quickly. Clearly Mamelodi gangsters only fight with their opponents in the area.

“You look familiar,” said Pieter to the youngster.

“I am Diamond Sindani,” said the youth.

“I belong to the Hard Dazzlers gang here in Mamelodi East. You have probably heard of Bra Ace Khune?”

“If you owe Bra Ace anything, make sure you pay up otherwise things get hectic. Last month, two guys tried to run away without paying Bra Ace and they are now a part of the underground movement, and I don’t mean the ANC, if you know what I mean.”

Pieter nodded as he listened with intent.

“How often do the police patrol this area?” asked Pieter.

“They patrol regularly but more so to make sure that there are no illegal political gatherings,” said the youth.

“They are quite happy to watch black-on-black violence.”

“You seem quite mature for your age,” he said.

“My father left home when I was three years of age and my mother died five years later,” explained Diamond.

“My gogo (grandmother) raised me. Unfortunately, when she retired as a school teacher, her pension money was really small. I made the commitment to provide for myself and my two young brothers as well as gogo.”

“Provide, you mean as in …” said Pieter.

The youngster could see the worry in Pieter’s face.

“We don’t steal or kill, well not unless we really have to defend ourselves,” said Diamond.

Pieter tried to sum up the situation.

“Are you on the hard stuff?” asked Pieter.

“I have tried to kick the habit but it is not easy, although I have cut back a lot these days.”

“So who do you sell too?” asked Pieter.

“Youngsters, I would imagine?”

“Yes, the market is quite young, but there are some seasoned customers too, even some cops.”

“Cops, do they buy it to use it or sell it?” questioned Pieter.

“I don’t know and also don’t care as long as the money is green,” retorted Diamond.

“There is no such thing as black cops, we call them informers,” answered Diamond.

“However, yes, the blacks who are siding with the government do buy here.”

“So, if you know that those blacks are siding with the government, then why don’t you sort them out?” asked Pieter.

“What, and lose a customer or two?” responded Diamond.

Pieter then set his mind off in a different direction.

“What about the girls in the area?” he asked.

“Do you want me to organise one for you?” he grinned.

No sooner had Diamond said that than a young, slim girl walked by and her face immediately caught Pieter’s attention.

The girl stopped and stared at the black Pieter.

“You are a law student at the University of Pretoria right, at least that is what you told me,” quipped Pieter.

Lindiwe looked the man up and down.

“Yes, I am a law student at the university but I really don’t think that we have met before,” she said.

“I never forget a face.”

“He is a visitor to Mamelodi East,” said Diamond to Lindiwe, with reference to Pieter.

“He seems like a psychic, how he knows about me?” said Lindiwe to Diamond, before heading off.

Lindiwe was used to having men stalking her. Many of her friends went the sugar daddy route and slept with older men in order to fund their dreams, but she wasn’t like that.

As Lindiwe walked on, Pieter turned to Diamond.

“How close to the end of apartheid do you think we are?” he asked.

“I can’t see apartheid ending in the next twenty years, it is what it is,” said the youth.

“What when it does end, the whites will pay the ultimate price.”

“What do you mean, do you believe South Africa will go the Zimbabwe route and chase all the whites out?” asked Pieter.

“Or worse,” said the youngster.

“I would love to be given the opportunity to shoot some whites to get justice for what they have done to our people over the years.”

“I understand the black frustration, but two wrongs don’t make a right,” he said.

“When Mandela is released from prison, I am sure he will go the route of reconciliation.”

Pieter could still see Lindiwe walking away in the distance. Even in his dream there was something special about that girl.
If he recognised her, why didn’t she recognise him?

“I wonder if I will be black forever?” muttered Pieter to himself, but loud enough for Diamond to hear it.

“Most of us stay that way,” giggled the youth.

“We can only dream about what it would be like to be white.”

Pieter narrowed his eyes. The youngster was indeed very intelligent for his young age. With a bit of mentoring he could be a future leader. This is the type of talent that the ANC needed to nurture and guide in the correct manner for when they finally did get into power.

“I never did get your name,” commented Diamond to Pieter.

“It is… Prince… Prince Ndlovu.”

At that point, the phone in Pieter Erasmus’ flat began to ring causing him to sit up in the kitchen.

“Wake up, Erasmus, it was just a dream.”

Pearce Ellison makes his way from Mowbray in Cape Town, to the Cape Town harbour to attempt to board a ferry to the island. He experiences racism all the way, from Afrikaners hooting and showing hand signals to his taxi driver of colour, right through to the shocking behaviour of the white security officials at… 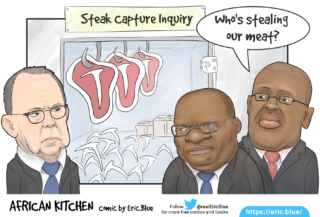 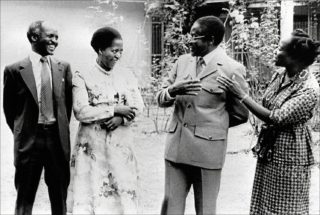