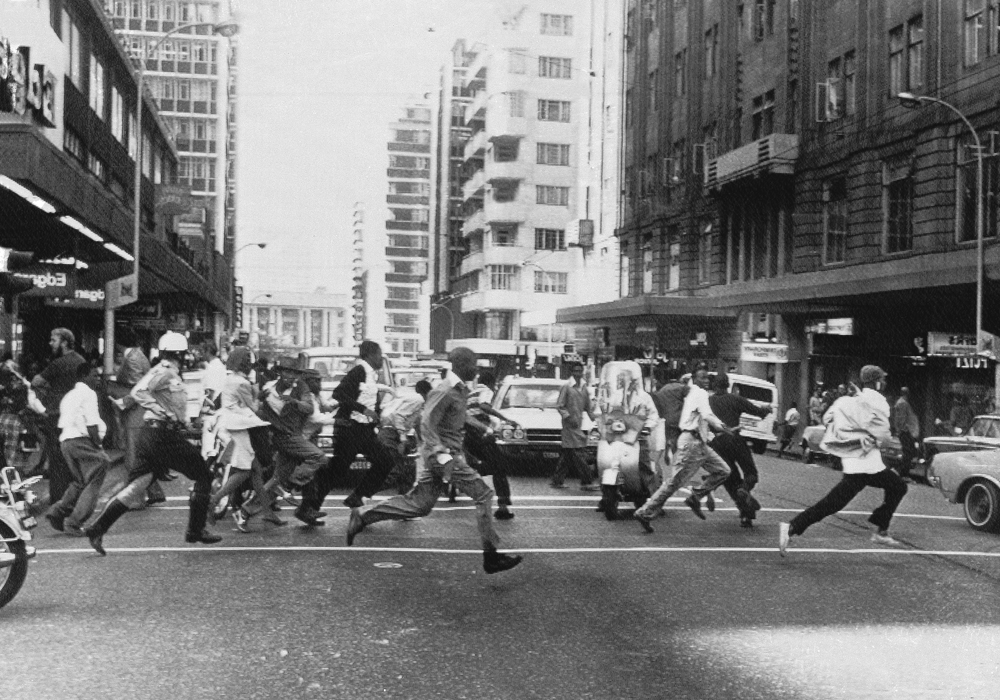 Chapter Sixteen – Three is a Crowd

Lindiwe Buthelezi headed off towards the taxis and suddenly stopped in her tracks. She needed allies around her. The mission was too large and complicated to complete on her own. A taxi driver hooted at her to get her attention to see if she was climbing aboard, but Lindiwe ignored him.

“E ea liheleng (go to hell),” said the frustrated taxi driver through the window before driving off.

Pieter had just made it to his car and watched on in a state of confusion as Lindiwe turned around and headed back to the coffee shop at speed. Had she forgotten something?

He locked the driver’s door of his vehicle which he had unlocked moments earlier, and followed Lindiwe back from a distance.

Two minutes passed by before an out-of-breath Lindiwe reached the table where Louise Burrell was still seated.

“Is something wrong, Lindiwe?” asked the American.

“Louise, I need to be honest with you, I need to tell you exactly why I am so keen to get to Mandela and how this situation could play out for good or for bad,” said Lindiwe.

She sat down on a chair and was about to tell Louise all that she knew about the future and the present, when that same husky male voice from earlier, spoke behind her.

“Did you forget something?” asked Louise in a state of irritation.

She was keen to get rid of Pieter in order to hear what Louise had to say.

Pieter saw his grey jersey on the table and picked it up, throwing a scowling glare at Louise in the process.

“Well then, we will see you soon, I am sure,” said Louise to Pieter.

The Lieutenant turned to head off but Lindiwe’s next set of words left him cold in his tracks.

“Sorry, where are my manners,” replied Lindiwe.

The cop did not need a second invitation and sat down in a chair nearest to Lindiwe.

“Look, we all need each other here,” said Lindiwe.

Pieter kept his eyes firmly focused on Lindiwe, while Louise was too angry to even look at her friend.

“I know I am a cop, but I want to help you in any way that I can,” said Pieter to Lindiwe, who smiled.

Louise had to hide her laughter.

Lindiwe took in a deep breath.

“The New South Africa is set to happen sooner than you think,” said Lindiwe.

“How do you know?” asked Pieter.

“I’m from there,” replied Lindiwe.

“I know it sounds crazy but it is true.”

Pieter kept his focus on the black girl’s eyes. Being a cop, he could usually tell by a person’s eyes as to whether they were lying, but this time he was sure that Lindiwe was being honest, even though her comments were somewhat out of this world.

“Lieutenant, somebody is going to try and execute Nelson Mandela and this could send South Africa into a state of civil war,” said Lindiwe.

Pieter gulped. Had Lindiwe worked out that he was on a mission to execute Mandela?

“Do you know the identity of the would-be assassin?” asked Pieter.

“If only, but I don’t know yet,” replied the girl.

A sense of relief filtered through Pieter’s body.

“So how do you propose finding out who the hit man or woman is?” asked the cop.

“We need to go visit my Gogo,” she said.

“Gogo, what is a Gogo?” asked Pieter.

“It is a black word for grandmother,” said Lindiwe.

“Gogo Albertina was a cleaner who worked on a project that she was sworn to secrecy about but she did mention that she saw stuff that she wasn’t supposed to see.”

“I don’t know exactly, but I have a feeling that Albertina may know more about the Mandela matter,” said Lindiwe.

“This could have a lot to do with how things will turn out for our country. If someone eliminates Mandela before the New South Africa arrives, then goodness knows what will happen to this country,” said Lindiwe in a louder voice.

“We need to get to your mother’s house as soon as we can.”

Lindiwe and Pieter nodded in agreement.

Pieter still didn’t like Louise and she felt the same way about the cop. They both believed in the old cliché that two is company and three is a crowd.

“Louise, I…” began Lindiwe, but she was interrupted by two men in black suits.

“Sorry to interrupt but we are looking for a Ms Louise Burrell,” the taller of the two men said, with a strong Afrikaans accent.

Louise glanced at Pieter and then Lindiwe before speaking.

“I am Louise Burrell, is there a problem?” she asked.

“Madam, you will have to come with us,” said the shorter of the two men.

“What is wrong?” asked Louise.

“Madam, we are from the Department of Home Affairs and we have reason to believe that you may be in our country illegally,” said the shorter man

Louise’s face broke out into a sweat.

“No way, my papers are fine, I even had a letter from your government which allowed me to visit Robben Island and interview Nelson Mandela but…”

“Madam, if you believe that your papers are fine then you have nothing to hide, so please come with us and we can go back to the office and sort out what needs to happen from here,” said the taller of the two officials.

What would happen from here? Would the South African government throw her out of the country and based on what reason, she wondered.

Pieter remained silent. It was clear the government officials did not recognise him as a policeman and just as well as he would have had a hard time explaining why he was in the company of a young, black South African girl.

He was quite pleased to see Louise being escorted out of the coffee shop.

“Ja nee, hulle wil mos met die swartes uithang, kry vir julle (yes, they want to hang out with the blacks so they must get what comes their way),” said one of the two white middle aged ladies at the table near the action.

Other white customers in the coffee shop also began to gossip over the scene that had just played out and most kept staring at Lindiwe. The black girl must be the problem. That is what blacks are… problems!

Of course, the incident had nothing to do with the black Lindiwe Buthelezi, but the two older ladies were not to know that. They were just applying a racist, typically South African 1987 mindset to analyse the situation without having the facts. One couldn’t blame them as their government did the same on a daily basis.

Lindiwe was still in shock. How did this all happen and what were the government officials going to do with Louise?

“They are not going to throw Louise out of the country, are they?” asked Lindiwe to Pieter, in a crying voice.

At least Lindiwe knew that she would see Louise again, if her dream was anything to go by.

Pieter had to hide a grin. He knew that Louise’s potential deportation must have had something to do with her trip to Robben Island. He knew that the interview with Mandela was never going to happen even though Louise had a letter on a government granting her permission to the ANC man.

“Look, we can’t just sit here, we need to do something,” said Lindiwe.

“Let me go home and see if I can make a turn at my mother’s house a bit later. I just hope that Louise will be alright.”

“I am sure the officials will look after your friend,” said Pieter, as Lindiwe sprung to her feet and headed off.

Pieter thought about the situation for a few moments and then also stood up and headed out the coffee shop. However, he wasn’t alone as a waitress was hot on his heels.

“The bill for the cakes and coffees, sir,” said the waitress.

Pieter turned around. There was no way that Louise could pay as she had been taken away and Lindiwe certainly didn’t have that sort of cash on her.

As he reached into his pocket to take out a twenty Rand note to pay the bill, a liberal-minded white woman who had witnessed the scene, turned to her husband.

“Jy sien, dit is nie net die swartes wat wil wegkom sonder om te betaal (you see, it is not just the blacks who want to get away without paying,” she said.

This Black and White thing was oh, so real!

Outside the coffeeshop, a familiar face was watching the proceedings, well-hidden with a newspaper covering his face at the right moments, inside a telephone booth.

Pieter was a good two hundred metres away from the phone booth where Spy was, but it was as if he knew that he was being followed. While walking to his car at pace, he suddenly turned around and let his investigative eyes check out the surrounding for potential followers. He couldn’t spot any, but the feeling of being watched just would not go away.

Once behind the wheel of an unmarked white police vehicle, he began to work on his next move. Was Lindiwe being open with him? What was her real objective? Was she playing him? Did she really know that he was the one who was on a mission to shoot Mandela and was just keeping it quiet? If the going got tough, would Lindiwe sell him out?

Soveel vrae, Erasmus, maar so min antwoorde (so many questions, Erasmus, but so few answers).

Pieter Erasmus nearly caused an accident or two as he drove back to the office. His mind was just not focused on the road.

What was this story about Lindiwe’s grandmother knowing something about how South Africa would eventually end up?

The answer was a simple one. There was no way that he could wait until 17h00 to meet with Lindiwe again. He needed to find Albertina Buthelezi. If Lindiwe got to her grandmother first, she might just tell her to keep hush on everything. Just how far could Pieter trust Lindiwe? Was this really another case of Black is Black and White is White and never the two shall meet?

Lindiwe gets to Albertina’s house in Mamelodi first and the old lady tells her of her working days at a laboratory on the Natal border. Albertina worked as a cleaner there, and heard about some strange happenings inside the laboratory. While all scientists were sworn to secrecy, several encountered burns to their bodies. One day,… 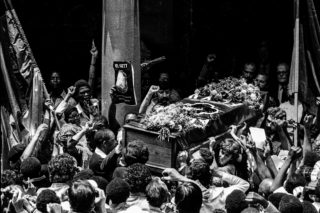 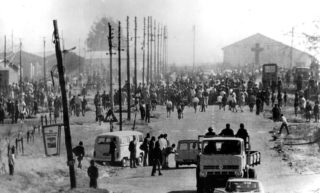 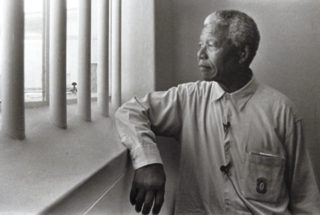 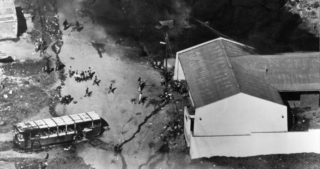